Hamlin Hall, whose base was laid in 1868, has been used as dormitory from its completion to present. A project named “Hamlin Hall is Ours All” was started in 2008 and by founding Hamlin Hall Executive Committee, a restoration was decided in 2009 for the building whose first restoration was conducted in 1932. In the year 2011, the facade and roof of the building were thoroughly overhauled and by doing necessary repairs, facade cleaning and retrofits LEED certification application was held on 27.01.2011.

Boğaziçi University 1. Male Dormitory LEED certification application was held on 27.01.2011. In the direction of the credit studies conducted throughout the design process, it was envisioned that the type of the certificate to be received could be Silver certificate with 50-59 points, but as a result of the renunciative works done during the construction phase, the works have been accelerated for Boğaziçi University 1. Male Dormitory to get a Golden certificate with 60-79 points in the LEED project.

In the scope of Green and Sustainable Campus Program and in the direction of the joint green building works with Sustainable Development and Clean Production Research Centre (BU-SDCPC), Boğaziçi University Directorate of Construction and Technical Works, TURKECO, Ekomim Ecological Architecture Services and BOZ Engineering, the application made to USGBC (U.S. Green Building Council) on the date of 27.01.2011 for LEED Certificate (Green Building) for the building of I. Male Dormitory (Hamlin Hall) to be received was replied in 01.09.2012 and our building was entitled to get the “Gold” (altın) certificate.

Extensive improvements have been made inside, in facade, on roof of the building and around it in accordance with the LEED criteria. Some of these:

- The materials used are stored outside the building as closed and so as not to disturb the people. Rubbles were sprayed water via machines to prevent dust formation.

- “No smoking” signs were placed in front of the building, the canteen and the clubs.

- Parking spaces for bicycles were created in front of the building.

- Lighting around the building has been modified to not cause light pollution inside the building.

- 25% water savings are provided with special faucet knobs attached to the tap.

- Instead of the old reservoirs, economic reservoirs of 2.5-liter are placed.

- Grey Water Recycling System was installed in the building.

- Energy conservation is provided by using natural air circulation instead of cooling system inside the building.

- The 22% of the hot water needs of the country are met with Hot Water System with Sun Collector placed on the inner surface of the roof.

- Hot air coming from the canteen is used for heating of the building passing through the pipes.

- The materials used in construction are domestic productions and obtained from a maximum of 800 km.

- FSC-certified wood was used in all window frames and doors.

- Paints, adhesives and varnishes free of heavy metal and solvent, non-generating VOC emissions are used. Linoleum flooring is made from recyclable materials. 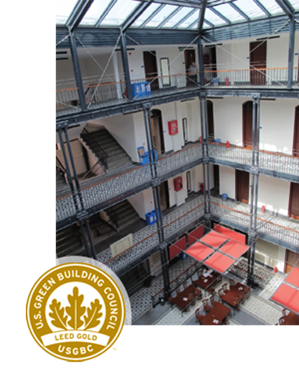 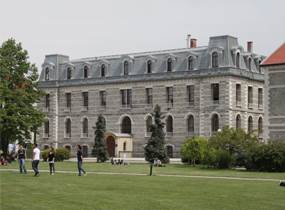